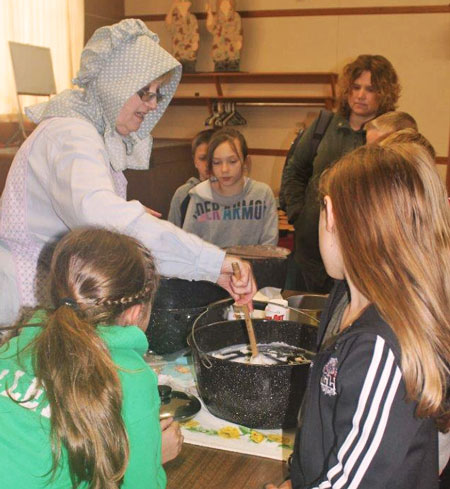 Museums are fun and educational for all ages in different ways.
Fourth graders in Fillmore County have been learning about their heritage at the annual Fillmore County Museum of Fairmont since 1994 and last Tuesday they celebrated the 25th Anniversary of the Fillmore County Fourth Grade Museum Day.
This special museum event originated through the joint-efforts of Janet Stephenson, former Geneva Elementary School fourth grade teacher, and the late Ruth Black, museum curator and leading spokeswoman for the museum at that time. Stephenson, who still coordinates the event today said,  “We decided we needed to show the county history and get the message out—to make the public more aware.”
Due to the chilly temperature, the fun, educational, learning stations, usually held outdoors, were moved inside this year, but that didn’t dampen the spirit of the event. The 55 students in attendance were divided into six groups which were rotated through the stations and tours, which included:  the Ashby and McClellan Buildings, the Country School Room, Soap and Butter-Making Stations, the Homesteader Presentation and the Quilting Station.  The day ended with a sing-along of folk music featuring string instruments with David Lynn of York.
Doug Rung, President of the Fillmore County Historical Society, said the Ashby Building, the original building of the museum was part of the Fairmont Creamery Company until 1885 and then was purchased by Dr. S. F. Ashby who made it into a doctor’s office and small hospital.  Drs. A. A. Ashby and Dr. Charles F. Ashby also practiced there.
In 1994, the building was donated to the Fillmore County Historical Society to be used as a museum to preserve Fillmore County’s history and heritage.  Historical artifacts were donated, items were catalogued and put on display. Rung said there is a big variety of items.
“The rooms contain medical supplies and equipment used by the Ashby doctors…musical instruments, World War I memorabilia, dolls and toys, kitchen items, various period-dresses, creamery items and there is a special room for doing family and county history,” Rung said.
A very special, one-of-a-kind item that is quite popular, can be seen in the medical supply/equipment area.
When a group of Shickley students were asked what they liked about the Ashby Building, they responded with strange looks and grins on their faces, “Dr. Ashby’s appendix!”  (Belonging to the late Dr. Charles F. Ashby and suspended in a bottle of formaldehyde.)
Lakota Tubberville, age nine of Shickley, said he really liked the Ashby Building.
He said, “There was a map of Shickley in the old-days and also an old year book with photos that looked really different than the ones today.”
Alexianna Lathan, 10 of Shickley, liked the mannequin (mother) taking care of the baby doll in the carriage—another unique Ashby Building exhibit.
The students were intrigued as they watched soap being made with melted lard, lye and water.  They even got to help stir the mixture.  One Geneva student, Brinleigh Foos, age 10, makes soap at home and was excited for another experience to do so, outside of her home.
At the Homestead Presentation Station, students learned about living on the “bleak” prairie and heard a story of how one young lady received flower seeds from her sister, who lived back East, to bring color to their homestead.  In the Country School Room, they learned about immigrants settling in the U. S. due to the Homestead Act of 1862.
Rung said the second museum building, the McClellan Building, donated by Beth Wilkins, is divided into historical stores and shops of the county’s history and includes a hat shop, telephone office, optometry office, one room school house, funeral parlor, electronic display, household furniture displays, farm tool display and a working soda fountain from Exeter. Rung said the historical society purchased the corner building adjoining the McClellan Building within the past 10 years.  A doorway was opened between the buildings and renovated to enlarge the museum.
Rung said, “This addition includes: memorabilia from the former Fillmore County Army Airfield, photography instruments, postal equipment, military uniforms, a doll house and the most recent addition, a bank teller cage.  It’s named “The Ruth Black Room” in memory of the late Ruth Black, museum curator and spokeswoman.
Owen Beavers, age 10 of Shickley, said he liked the McClellan Building because he saw a lot of World War II items and he enjoys history like that.
The Butter-Making Station was enjoyed by everyone, being a hands-on experience of shaking cream and salt until it solidified.  Joey Stoner, age 10 of Geneva, said he enjoyed making it because he got to shake it for a long time and that it looked good when it was finished. At the Quilting Station, the students each designed their own nine-patch quilt block.
Stephenson said that in spite of the weather, the day went very smoothly, even though the event had to be held inside. Stephenson believes it is an important event and she is very grateful for all the support received this year and previously.
“It’s good to educate our children in local history, and, hopefully, instill the importance of it.  Through the years, I’ve truly enjoyed this.   It’s always been a big success and we’ve received a lot of favorable comments—that’s why we keep going with it,” Stephenson said.  “The day would not be possible without the dedication of all the volunteers, most being board members, who help every year and the grants we receive from the Fillmore County Foundation and the Tous Charitable Foundation.”