Out of all the bills we’ve seen in this opening month of the Legislature, I’d like to discuss why LB 299 and LB 790 are such high priorities for me, and what impact they could have on Nebraska.
My priority for this session, LB 299 aims to alleviate some of the barriers surrounding more than 150 different professions in Nebraska which require a license. LB 299 would provide Nebraska with an analytical framework for the state to review licensing requirements.  Currently, Nebraska features some of the highest requirements surrounding occupational licensing, and while these laws are aimed at “protecting” the public, a very real consequence is a loss of jobs and services. If passed, LB 299 would work to reduce regulations and barriers to entry that impact Nebraska’s small businesses and entrepreneurs.
I introduced LB299 last year but after the hearing in the Government Committee it was clear the bill needed a little more work. Over the interim my office worked with a number of interest groups including the Platte Institute and ACLU; government agencies and occupational boards; visited with Nebraskans who have been negatively hurt by licensing requirements; and even the Federal Trade Commission. The Federal Trade Commission even submitted a policy brief last week specifically on LB299.
The FTC says the following in the LB299 brief, “Occupational licensing can offer important benefits, such as protecting consumers from actual health and safety risks or supporting other public policy goals. That does not mean, however, that all occupations should be licensed, or that restriction on an occupation always yield more benefits than harms. Licensing impeded entry into professions and occupations, which inherently limits competition. Particular licensing requirements can also harm competition and consumers, leading to higher prices, lower quality, and reduced consumer access to services and goods, with few or no offsetting consumer benefits. Licensing regulations may also impede economic and geographic mobility for workers, exacerbating unmet consumer demand for services.”
Specifically considering LB299 in Nebraska the FTC offered this summary:
“LB299 reflects the Nebraska legislature’s concerns about undue licensing regulations and the harm they can do to competition and consumers, as well as workers and the larger economy. We share those concerns. We support the bill’s approach to occupational regulation, to the extent that it would apply an analytical framework similar to our own, because we believe this approach tends to foster procompetitive and pro-consumer regulatory reform; and we will continue our support of Nebraska lawmakers’ efforts to advance procompetitive reform of your licensing regulations.”
After feedback from many state boards, the Platte Institute, the ACLU, and other senators, and the FTC brief, I believe we have amended LB299 to a form that will pass into law. I’m hopeful the law will pass and the first phase of LB299 will be implemented in the interim and we can get more Nebraskans back in the workplace.
On the topic of economic innovation, I was pleased to introduce another bill – LB 790 – which would allow for mobile hair salons and barbers to operate in the State of Nebraska. This concern was initially brought forth to me by John Duncan- a cosmetologist and entrepreneur when he approached my office with concerns from his clientele. Mr. Duncan informed us of his successful career as a hairstylist and the loyalty he had earned from his clients as a result, but as some of his clients aged they found it more and more difficult to make the trip to his salon for their appointments. John came to us with a proposal- to amend the current law to enable the use of a mobile salon so that he could make the trip to see his clients. I’m pleased with the end result of LB 790, as the value of a fresh haircut becomes all the more valuable when it was previously so difficult to obtain.
There are several other occupational bills up for consideration in the 2018 session. I will be watching all of them closely and relying my thoughts on them to you. I will certainly be helping on all bills that present common sense reforms to our licensing requirements and help Nebraska workers while keeping consumers safe. 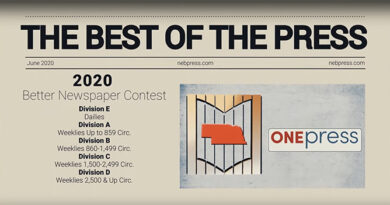