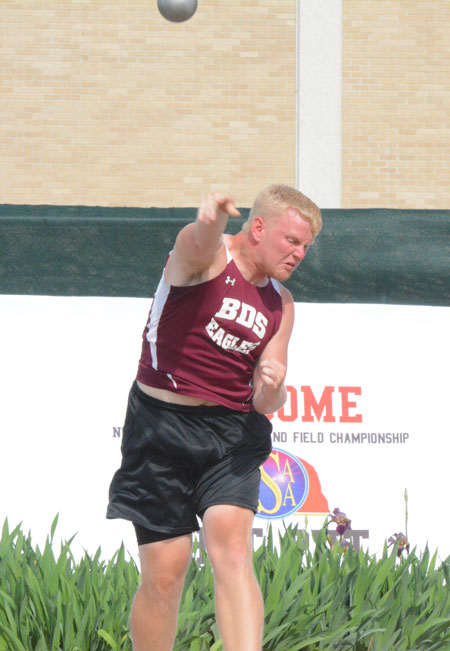 The three Bruning-Davenport/Shickley male athletes that qualified for Omaha combined to score 18 team points at the 2019 NSAA State Track & Field Championships.  And, all the Eagle points came in field events.
BDS’s John Christensen placed second in the Class D boys’ shot put in Omaha.  The Eagle senior uncorked a throw of 51-feet, 6.5-inches at Omaha Burke Stadium.  Christensen also placed eighth in the discus on Saturday morning with a throw of 125-11.  Teammate Nolan Weber was about a dozen feet better on May 18.  The BDS junior threw the discus 137-3, which landed him in sixth position in a very talented field.
BDS sophomore Aaron Mick placed third in Class D boys’ pole vault on Friday afternoon.  Mick cleared 13-10 in Omaha for a new personal best.  His effort was only good enough for third place (misses).  The winner vaulted four inches more, 14-2.  The Class D boys’ field was stacked this year with 10 athletes vaulting over 13 feet in Omaha.
TaraLee Hudson represented the BDS girls at State and placed 10th in the Class D girls discus.  The Eagle senior struggled in the extremely windy conditions on Friday with her first two preliminary throws ending up in the netting.  Hudson did unleash a throw of 100-8 in Omaha.

BDS In CRC Tournament Semi-finals; Improve To 17-8 On Year