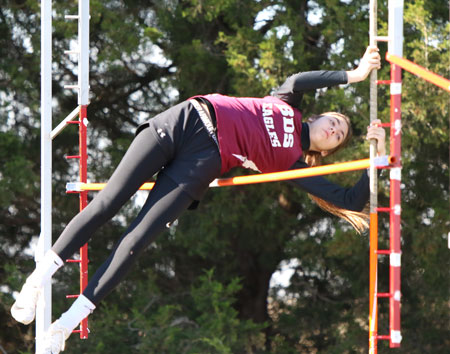 Bruning-Davenport/Shickley qualified one girl and three boy athletes to the 2019 NSAA State Track & Field Championships.  And, the Eagles all qualified in field events.
The BDS boys went one-two in the discus on Friday.  Nolan Weber won the event with a toss of 147-feet, 6-inches in Sandy Creek.  Teammate John Christensen was next with a toss of 141-3.  The boys Class D discus begins at 8:30 a.m., this Saturday morning at Omaha Burke Stadium.  Christensen also took second in the shot put with a heave of 50-7.  The Class D boys shot put will start at 3:30 p.m., this Friday in Omaha.
Eagle sophomore Aaron Mick placed first in the pole vault after clearing 13-9 in a talented field in Sandy Creek.  Mick enters the State Meet with the best District-qualifying mark and will hope to keep the Mick family streak alive.  The Class D boys pole vault starts at 3:30 p.m., this Friday.  TaraLee Hudson will also be competing in Omaha after winning the discus in Sandy Creek with a throw of 113-5.  Hudson’s District-winning toss is the fourth best in the State.  The girls Class D discus starts at 5:30 p.m., this Friday.
The BDS boys scored 57 points at the D-6 District to land in fourth place.  The Eagle girls notched 22 points to place 10th at the 12-team meet in Sandy Creek.
Mick placed sixth in the 200-meter dash, 24.42 seconds on Friday.  Kameron Dickson took fourth in the 400-meter dash in 54.45 seconds and narrowly missed State.  The BDS boys 400-meter relay squad of Dickson, Christensen, Logan Schroeder and Mick placed fourth in 47.56 seconds. Eagle Taylor Sliva placed sixth in the 100-meter hurdles in a time of 18.1 seconds. The BDS girls 400-meter relay team of Maria Sliva, Taryn Fiala, Kenzie Bohling and T. Sliva placed sixth in the 56.04 seconds.