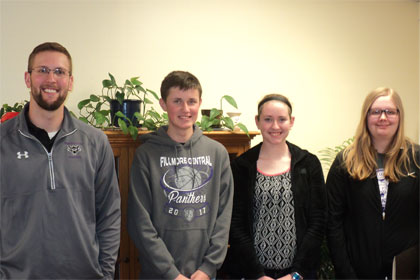 The GFWC Fairmont Woman’s Club met March 18, at the Fairmont Senior Center for a luncheon and their regular meeting.
President Linda Carroll welcomed members. Members repeated The Flag Salute and Club Collect in unison. The thought for the day was given by Wanda Marget on Beauty.
President Carroll introduced our speakers for the day, Braden Myers, Tori Stoldorf and Madison Bonin, Fillmore Central students who attended the GFWC Sophomore Pilgrimage and their sponsor, Jordan High. These students were sponsored by the GFWC Fairmont and Geneva Woman’s Clubs. Ryan Poppert also attended the Sophomore Pilgrimage but was unable to attend the meeting due to a track meet.
The students told about their experience at the capital. The students were addressed by the elected officials and representatives from the state’s elected offices including the Governor, Lt. Governor, Secretary of State, State Auditor and State Treasurer. They watched the proceedings of the Nebraska Legislature. They ate lunch at the Governor’s Mansion, toured the State Capitol and visited the Nebraska Supreme Court.
Members answered roll call by giving a house cleaning hint.
Inez Logan gave a parliamentary procedure on how to correct or make additions to the minutes.
Faye Bonin gave the club woman report on “Celebrating Earth”–How Earth Day came about and some projects you could start.
The committee reports were given: Conservation Chair Jean Priefert reminded members not to plant their gardens too early; Education Chair Marge Finley told about being informed about bills being proposed in our government; Home Life Chair Beth Uden told about the importance of exercising.
Secretary Beth Uden read the minutes of the March 21, 2017 meeting which were approved as read.
Kay Harris gave the treasurer’s report which was filed for audit. She gave the amount collected last month for our March of Dimes project.
The NFWC State Convention was in Seward on April 20-22. Details were given on the convention.
We celebrated Federation Day on April 24 by hosting a brunch and fund-raiser for Saint Judes Hospital, at the Fairmont Community Church. Other clubs in the district were invited to attend.
Election of the 2017-2018 club treasurer was held and Meleese Schmidt was elected.
President Carroll passed a sign-up sheet for volunteers to work at the Red Cross Blood Drive that was held at the end of April in Fairmont.
Donna Lefler talked about our Relay for Life team. We will be raising funds for the Relay for Life which will be July 29 in Geneva.
Donna Lefler, NFWC Education and ESO chairman, presented Nancy Galaway her 6th Century certificate in the ESO reading program.
The club held its annual fund-raiser “Spring Fling Auction.” Members brought items to be auctioned and enjoyed bidding for their favorite items.
Being no further business the meeting was adjourned.
The next meeting of the GFWC Fairmont Woman’s Club will be May 16, at 8:30 a.m., for a brunch and meeting at the Fairmont Community Church. The thought for the day will be given by Louise Gipson. Roll call will be to give a home health remedy. The program will be “Improve Your Health, Stay Fit by Jenny Hoarty, wellness coordinator, Fillmore County Hospital, and the installation of 2016-2017 officers. Hostesses will be Sandy Nelson and Meleese Schmidt.

Fund-raising for greenhouse in full bloom