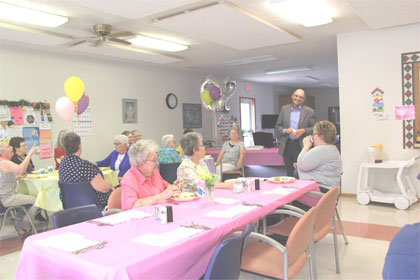 By Leesa K. Bartu
The Exeter Senior Center celebrated their 20th anniversary on May 7, with a lunch and an afternoon open house with cake and punch. After a blessing from Pastor Kim Dunker, the guests enjoyed a pulled pork lunch followed by a brief history of the quest to open a senior center given by Fillmore County Senior Services Director Brenda Motis.
Motis was followed by the Village of Exeter Mayor Alan Michl who recalled being present for the opening, “I really appreciate what they have done here. There are two things that are important in successful communities, a library and a senior center.”
Michl praised the team that has kept the senior center a hub in the community and thanked them for the collaboration between the senior center and the city. He went on to apologize for the downtown construction mess that has affected the front of the senior center.
Aging Partners representative Martha Hakenkamp shared some statistics on the Exeter Senior Center. She noted that over 16,000 meals have been served even though the center serves a meal just once a week and that over 17,000 volunteer hours have been donated to the center.
To close, Motis recalled the pivotal roles that Frank Rouch, Doris Hall and Elva McBride played in bringing the dream of a senior center to fruition. 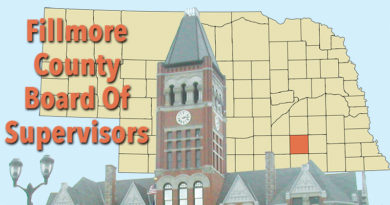 County Board May 12 meeting

Send your county fair photos in

How Is Overregulation Impacting You?