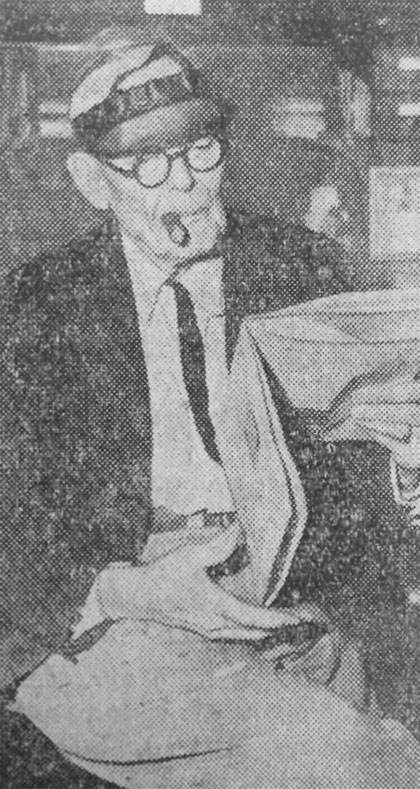 Reprinted From The
Omaha World-Herald
March 1951
At 81, Lou W. Frazier, one of the oldest and crustiest of Nebraska newspaper editors, has at long last conceded he is not the man he once was.
After a four-year struggle with failing health, he has reluctantly decided not to return to the full-time editorship of his weekly, the Fillmore Chronicle.
But he’ll keep on writing his column, “Side Lights,” in which he has for years been throwing his weight around without much worry about hurt feelings.
“The Chronicle will keep printing it until I make it so damn bad they can’t,” he said with a chuckle.
New lessee of the paper this week is John Edgecombe. He will add the Fairmont job to that of putting out the Geneva, Neb., Signal.
Mr. Frazier, son of an 1870 homesteader, started in 1883 as a printer’s devil on the old Pioneer News, the county’s first newspaper. His dad took over the shop a couple of years later and the son worked in the back room. The paper was given its present name.
“It hasn’t missed an issue since,” said the editor.
Four years ago he leased the property to Ted Witter, expecting to take a year’s vacation. Before vacation time, however, he fell down some stairs and jammed a leg.
He’s been “stove up” at home since.
“I’ve had plenty of enemies in my time,” he said. “I can’t stand hypocrites, deadbeats, Communists and Ku Kluxers and damned if I haven’t given ’em hell. But I’ve made some friends, too.
“Used to run the paper with a shotgun and I’d a peppered any blankety-blank who come around looking for trouble.”
He was State Printer back in the days when that job was in vogue, and for several years was Fairmont postmaster.
“The boys had been robbing that post office regularly when I came in,” he said. “I left the safe open with a sign on it saying there wasn’t any money. I put the currency in a bag and took it home with me nights. I had an automatic at my side and no blankety-blank thug ever had the guts to tackle me.”
The editor is a Republican but has been known to jump party lines.
“I’m a Republican blacker than sin,” he said. “But I never voted for a skunk just because he was a Republican.”