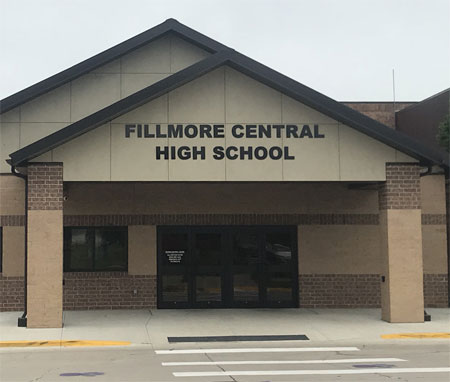 The Fillmore Central School Board worked through a light agenda at the board’s regularly-scheduled April meeting.
Among the items discussed at the April 8 meeting were:
• The school board unanimously approved the committee’s recommendation of a 2.5 percent salary increase for non-certified staff members in the school district for the upcoming school year.
• The school board unanimously approved a small change in the 2019-2020 school calendar.  Parent-teacher conferences will take place on March 9-10 and there will be no school on March 11-13.
• The school board accepted resignations from Valerie Ellis and Ashley Taylor.
• There were 13 applicants for the three $500 Mabel Nezda Scholarships.
• FC Elementary School Principal Aaron Veleba reported there have been several applicants for the job openings at the elementary school and he anticipates filling the positions soon.  He also reported the current 2019-2020 kindergarten enrollment for school district looks to be 41.
• FC Middle School Principal Steve Adkisson reported that eighth grade graduation will take place on May 16, beginning at 2 p.m.  He also thanked Jenni Stengel for her help with the recent SIP External Visit.
• FC High School Principal Ryun Theobald reported that the spring sports season has been a challenge to get started.  He also noted that FC senior Tori Stoldorf would be appearing on the NSAA Championship Best of the Best NETV production for her State Speech Meet championship in the Persuasive Speaking category.
Theobald also reported that finding a qualified Spanish teacher has been difficult.  “It’s a big challenge to hire a Spanish teacher right now,” he said.
• FC Superintendent Mark Norvell reported that school officials have been visiting York and looking into the possibility of outsourcing school breakfast/lunch services with Lunchtime Solutions. Graduation at FC will take place on Saturday, May 11.
• Handbook changes included adding no vapor devises allowed on school grounds and changing the principal’s honor roll at the high school to honor roll with distinction and honor roll.
• The school board discussed the Early Retirement Policy again.  When a teacher becomes eligible and a monetary cap were again discussed.
“I’m all for the policy…maybe we need to up the amount some,” school board member Shaun Farmer said.  “I think $30,000 is a doable number.”
School board member Mike Motis said that maybe it should be offered off-and-on.
“I think it’s a good thing for both the school district and the teachers,” Norvell said.  “It’s almost always a savings to the district.”
• The humidity problems at the FC Elementary School were noted.  Between 25 and 30 dehumidifiers are operating daily at the school.  They also need to be dumped twice a day. Besides the obvious humidity, mold problems could also take place.
“It’s not a good situation,” Norvell said.  “It’s the old system and it needs to be replaced.”

Blender Bike To Visit Davenport, Others