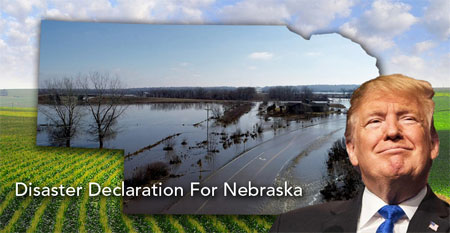 Today, President Donald Trump signed a disaster declaration for Nebraska. Nine counties were approved to receive individual assistance including: Butler, Cass, Colfax, Dodge, Douglas, Nemaha, Sarpy, Saunders and Washington were approved. In addition, 65 counties and 5 tribal nations were approved for public assistance. Counties that were not initially approved could still be declared.

Counties not included for individual assistance as part of today’s disaster declaration are being reviewed by FEMA as damage assessments continue. Homeowners and businesses that have had damages are encouraged to report those to local emergency management. As counties qualify, they will be added.

Individual assistance can include grants for temporary housing and home repairs, low-cost loans to cover uninsured property losses, and other programs to help individuals and business owners recover from the effects of the disaster. Individuals and businesses who sustained losses in the designated area can begin applying for assistance by registering online at www.disasterassistance.gov or by calling 1-800-621-3362 or 1-800-462-7585 TTY. The toll-free telephone numbers will operate from 7:00am to 10:00pm (local time) seven days a week until further notice.

All public assistance requests were approved, but only for debris removal and emergency protective measures. As damages assessments continue, more counties and categories of work are expected to be added to the list.

Information on filing claims with FEMA can be found on the FEMA website at:  https://www.fema.gov/disaster/4420.

The response to the historic weather events Nebraskans face has been overwhelming. Information, both accurate and inaccurate, is coming from every direction. In an effort to streamline some of that information, staff at the Nebraska Emergency Management Agency’s (NEMA) Joint Information Center are continuously collecting information and posting links on social media and the NEMA website.

In addition, there are several reputable websites and phone numbers for information on donations, aid, and other services:

www.nebraska.gov/nebraska-strong: Help in connecting those in need with people offering resources. This is a partnership with NEMA and the Nebraska Preparedness Partnership. Governor Ricketts has proclaimed Friday “#NebraskaStrong Day.”

www.ndbf.nebraska.gov: The Nebraska Department of Banking and Finance (NDBF) has information on avoiding investment scams, which increase during disasters. NDBF also has a consumer hotline, (877) 471-3445 or (402) 471-3445.

https://protectthegoodlife.nebraska.gov/report-scam: The Nebraska Attorney General’s office has a website for reporting scams. If you receive an unsolicited call for donations, use caution. Know to whom you are donating. Never give personal information including credit card information to an unsolicited caller.

https://twitter.com/NEDHHS: Nebraska Department of Health and Human Services (NDHHS) is tweeting information on local water testing, mental health resources, and other health-related information. Local water testing will take place in Fremont, Norfolk, and Verdigree between today and March 24. The schedule and locations are available on the NDHHS website http://dhhs.ne.gov/Pages/newsroom-2019-March-EPA-Water-Testing.aspx

800-831-0550: The Nebraska Department of Agriculture (NDA) has established a hotline for agriculture-related donations such as hay and equipment.

211: The Heartland United Way 211 is a good source for resource information including shelter needs, cleanup, food, clothing, etc. If you encounter difficulty reaching them by dialing 211, please call 866-813-1731.

800-464-0258: The Nebraska Department of Agriculture has set up a hotline for farmers and producers who are feeling emotionally overwhelmed.

During difficult times, we often hear stories of neighbors helping neighbors. A team of volunteers with the Omaha post of the Society of American Military Engineers came together to help their neighbors near Fremont yesterday.

A call was made for volunteers through SAME for engineers to provide assistance in evaluating the threat of increased water flows from a breach in a privately owned levee near Fremont on Legg Lake that could cause more flooding in an already saturated area.

The team gathered at Sapp Brothers in Fremont just before 2 p.m., studied drone footage from earlier in the day, met with local officials, and headed to the Legg Lake levee to inspect the breach. The team found that the breach does not threaten Fremont.

Cindy Lincicome, in and email, said that the team “demonstrated the essence of SAME supporting our communities.”

Being able to call on these volunteers freed up other personnel to address other concerns. Neighbors helping neighbors.