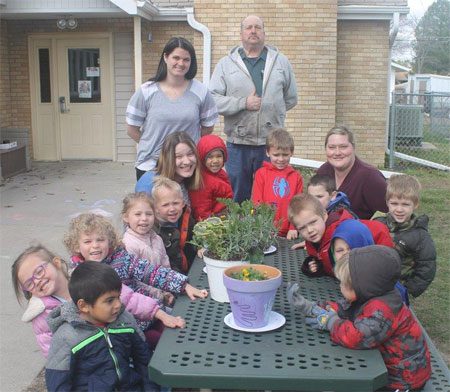 Learning about plants is exciting for they possess a lot of magic.
Plant seeds, grow plants and eat.  Save the seeds and start again—pure magic!  Plant chocolate mint herb plants and your garden will smell like a candy store!  Magical uses of herbs include health-wise, prosperity and spiritual protection.  Find a four-leaf clover (one out of, only, ten thousand), make a wish and it will bring you good luck.  Have fun admiring the Venus Flytrap, but beware—it can be triggered into clamping shut with a touch as light as a hair!!   But, luckily, its tastes lean toward insects!
Eighteen students at Fillmore County Head Start have just wrapped up their own fun-week learning about plants and how they grow.
Upon entering the classroom, one can feel magic in the air and see it in their eyes, as they, excitedly, talk about plants and participate in related activities. Fillmore County Head Start teacher Allison Cliffords, said it is very important to teach the 3-5 year-olds about plants.
“It helps them understand living things versus non-living,” Cliffords said.  “They need to know what growing plants are, how they grow and how they’re taken care of.”
Cliffords planned a week packed with fun and educational events for the students.
“The Surprise Garden” by Zoe Hall, a big, beautiful, nature book with splashy, color photos, gave the students insight into seed sizes, shapes and their growth needs—soil, water and sun—and the fact that some plants flower and produce above the ground and some flower above the ground while producing below it.  The students learned, in awe, that the necessary water can, not only, come from a rain cloud, but also from a sink, hose or watering can.  The class was also made aware of different plant and produce sizes—with the watermelon taking the honors (in this story) as the longest and the sunflower ranking the tallest.
Cliffords said the book brought interesting reactions from the students.
“They all sat in wonder when they realized vegetables all come from the ground,”  Cliffords said.
Jackson Kramer, five of Geneva, said he really likes plants now.
“You can make vegetables with them!”  Kramer said with excitement.
Wesley Steig, five of Geneva, liked learning all about plants and said that he has a favorite.
When asked what that one was,  he replied with a grin, “Corn, because I love to eat it!”
The students enjoyed a nature walk and all concluded there was something very different about the grass—since it had rained.  It was a lot greener!  Then to add to this excitement, they each planted their own grass in clear cups—filling half ways with soil and sprinkling in a handful of seeds, more soil to cover and then the finishing touch—learning to use the watering can, a new hands-on task, which they all loved doing.
Other learning activities of the week included:  learning the parts of a flower and by using a straw, they pretended to be a flower sucking up water, a counting flower activity book that taught them listening skills, free play time with soil, cups and artificial flowers where they got the “feel” of planting, and a Play-Doh station with cookie cutters and other gadgets that allowed the students to create their own flowers.
The grand finale of the week was Charlie Barbur, owner of the Barbur Floral Company of Geneva, who created a sensory (touch, smell and see) garden for the class and  helped the students transplant flowers into large flower pots to adorn their out-door play area.
As Barbur began making the sensory garden, he told of the three elements that make up the soil.
“First we have perlite, these little pellets that come from volcanos, which keep the soil loose,” Barbur said.  “ Then we have peat moss from Canada, which is decomposed plants and the third ingredient is composted pine bark.”
He then told the class how humans and plants share and benefit from the Oxygen-Carbon Dioxide Cycle.
“Humans and all living creatures breathe in oxygen and give off carbon dioxide.  Plants breathe in carbon dioxide and give off oxygen,” Barbur said.  “If we didn’t have plants, it’d pretty much be over.”
Barbur then explained the flowers as he began arranging them in the pot.  They included:  Rosemary, Lavender, Mosquito Plant, Geranium, Lantana, Daiscia and Scaevolva.  He fertilized the garden, added more soil, labeled the plants and told the class they could water it.
Barbur then helped the students transplant two types of flowers, Violas and Dianethus, into three large clay flower pots the class had painted and decorated earlier and the pots were then taken outdoors.
The students said they all liked learning about plants.
“I liked hearing about the watermelon in the read-aloud book,” Harper Brahm, age four of Swanton, said.  “I also learned the parts of a flower, how to plant grass and use a watering can.”
Tae Nguyen, age four of Geneva, said, “The flowers smelled so good and it was fun transplanting them.  I learned a lot!”
Cliffords said it was a good week and that she enjoyed teaching the unit because it gave the students this learning opportunity they may not have, otherwise, experienced—fun and educational, both.
“The kids were excited about it all, as they like hands-on activities,” Cliffords said.  “It was, also, very exciting for me— I just want to keep going with it!”