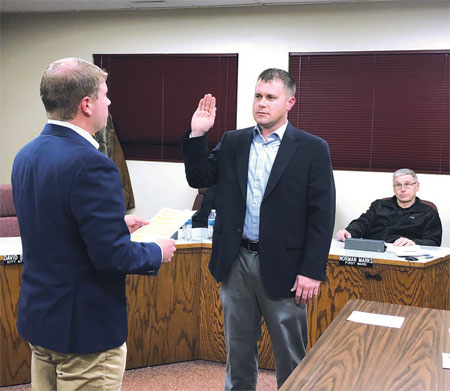 The Geneva City Council worked through a full agenda at the council’s regularly-scheduled meeting last week on Tuesday, February 19, because of the President’s Day holiday the day before.
Council President Josh Turner briefly went over the Community Center Committee meeting with the Fillmore County Board.  He said the committee’s main purpose of meeting with the supervisors was to start talking about achieving a section of the old Fillmore County Hospital from the county.  He noted some questions and concerns were brought up and answered.  The next step is for both groups to form a sub committee and debate what each side might want to do.
Next, Mayor Eric Kamler nominated Cody Lightwine to fill Jim Donovan’s Third Ward city council seat.  The city council unanimously approved Kamler’s choice.  Fillmore County Sheriff Bill Burgess then gave his quarterly report.
Ryan Kavan with JEO Consulting then went over plans on where to place the refurbished Geneva arrow sign and possible designs for the two blocks of G Street that are going to be repaired this year.  The city council was in general consensus to place the sign in a 30-foot center island in G Street just west of 13th Street.  The city council also expressed interest in a two-block street design that uses paver bricks already owned by the city in a two-foot strip down the middle of the new pavement.  Brick would also be placed into crosswalks at the intersections of 11th and 12th Streets.  This brick work would add an estimated $55,000 to the engineer’s estimate of $1.05 million ($220,000—$230,000 of the project is estimated for new lighting on the two blocks).
The city council instructed Kavan to draw up specs to concrete pave the two blocks with alternates for the brick work.
“I think the brick is nice but it’s also a lot of money,” Councilman Chuck Udell said.
The notion that adding the brick may compromise the solidness of the concrete was also discussed.
Kavan will report back to the city council with final opinions.
The last item on the agenda was formal Request for Annexation from Geneva businessman Ryan Rippe.  Rippe wants to develop the area north of the Kaneb Pipeline west of U.S. Highway 81 and north of the north entrance into Geneva.  His RARIE, LLC., North 13th Street development project would feature nine lots for development.  Rippe also plans to open a restaurant on one of the lots. The city instructed JEO Consulting to perform an annexation study at its previous meeting to highlight the pros and cons of annexing the development.  To make this possible, a small portion of several other properties would also have to be annexed.
Appearing via the phone, Geneva City Attorney David Solheim said he sees at least a 300 foot section of these properties to be needed to extend the annexation to Rippe’s North 13th Street project. Rippe also noted he desires to have city water and sewer attached to his new restaurant.  He said he expects to hire 30 employees at his restaurant and would like to see it opened by the end of this year.
No action was taken until results of the annexation survey are received and discussed.
Geneva City Administrator Kyle Svec noted during his city administrator’s report that Karen Margheim of Shickley has been hired as the new administrative assistant for the city.