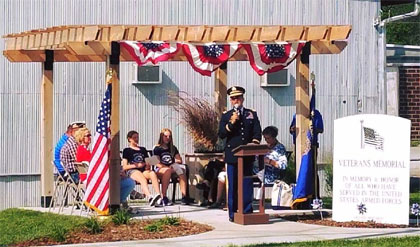 By Crystal Vavra
Special to The Signal

On August 20, residents and family members gathered in Milligan to dedicate a monument that recognizes and remembers all veterans who have served in the military and who shaped our country and our community. This monument and space has been named Milligan’s Veterans Memorial Green Space.
The ceremony began with Advancing the Colors by Milligan American Legion Post No. 240 and Sons of the American Legion under the leadership of Commander Jim Suda. They were followed by Fillmore County Legion Riders Post No. 68 led by Director Tom Ortgies.
The emcee for the special program was Phyllis Schoenholz of Ohiowa. She is an American Legion Auxiliary member and the South-central coordinator for Quilts of Valor. Karen Filipi of Milligan sang the National Anthem and the Pledge of Allegiance was led by American Legion Junior Auxiliary State officers Kateyln Babula, president, and Briana Capek, vice-president. Welcoming everyone to the ceremony was Eric Milton, chairman of the Milligan Board of Trustees.
Unit No. 240 American Legion Auxiliary President Diane Jansky said a few words of thanks to the committee and welcomed everyone who attended. Veterans Memorial Green Space Committee members Mary Johnson, Crystal Vavra and JoAnn Vavra spoke of the process of how the idea of the  memorial began with the village having to tear down the former Frosty Mug, which left an empty lot. The committee ladies felt the empty lot would be a perfect location for the memorial and with the approval of the village board of trustees, the project began.
The committee received grants from the Fillmore County Foundation and TransCanada. They also received donations and continued support from American Legion Post No. 240, Sons of the American Legion, American Legion Auxiliary, Fillmore County Legion Riders and many individual donors.
The committee gave special recognition to the volunteers for all the hard work and dedication it took to complete the memorial. The project includes the Veterans’ Memorial monument, a gazebo area with two benches, landscaping, sidewalks, and a permanent home for the Milligan School bell dated 1913.  Greg Holdren of Friend painted a mural of the American Flag with the background of the scenery of Milligan and the three bombers that crashed on the Matejka farm on October 25, 1943. One of the pilot’s (2nd Lt. James H. Williams) family attended the dedication. They were Ed and Karen (Williams) Edlemen from Tarrytown, N.Y., and Ed Staubach from Poland, Ind.
The keynote speaker was Father Steven Thomilson, who is the pastor of St. Wenceslaus Catholic Church in Milligan and St. Stephen’s Church in Exeter. Blessing of the memorial was done by Reverend Pat Norris, Minister of the Milligan United Methodist and Fairmont Community Church. Placing of the wreath at the monument was performed by Jansky and Auxiliary member Adrienne Capek.
In military history, wreaths carry special layers of meaning—victory, bravery and peace. Placing a wreath is to pay formal respect to American soldiers and/or veterans for the sacrifices they made for our freedom. Following the placing of the wreath was Rendering of Military Honors. This was led by Gerald Capek, Elvin Filipi, Sherman Havel, John Kassik, Dan Kotas, Dwayne Luzum and Mark Vavra with the playing of “Taps” by Mike Kassik.
The dedication ended with closing remarks from Fillmore County veterans service officer Nick Wollenburg. With the ending of the dedication, the committee feels that the memorial and green space is a great tribute that all can visit and enjoy. They appreciate all the donations and support from the community. The committee has continued to receive donations, plus another grant from the Fillmore County Foundation to finish the mural this fall, weather permitting.

Eager to Hear Your Thoughts