I got to thinking the other day that with laptops, cell phones, Blackberries, iPads, iPods, Kindles, you name it, that it’s nearly impossible anymore to sit through an entire meal without some device beeping or buzzing.

That’s not a bad thing. Its technological advancements and they are constantly changing.

I had the honor of talking about this during a visit to O’Neill High School which is one of only 52 schools in the country to be honored as an Apple Distinguished School for its use of computer technology.

Like students everywhere, they understand that technological advancements will improve their education and make them more productive future leaders of America.

To be sure, they have fun with today’s technology and stay in touch with friends through social networking  but they embrace all of it seriously, as well, because they know that every technological reform is a step towards advancement and a step towards progress.

Years ago hardly anyone would have imagined working on a computer and communicating with people on the other side of the world.

When I first ran for governor over 20 years ago it would be several years before Google was even invented. It was a time when we sent out news releases by snail mail or hand carried them.

Today, releases are delivered with the speed of light and they have to be short.

I never imagined 20 years ago that there would be such a thing as a tweet with a maximum of 140 characters.

I’ve learned, as have most of us who grew up before the digital age, that we need to stay on top of the technology and all its changes and we have to play catch up with younger folks who grew up around computers.

I do hope that my fellow Nebraskans will be careful when posting information on line. Cyber thieves are constantly surfing the internet and we need to remember that once on line it’s difficult to delete it.  An unwise status update on Facebook could haunt you forever.

Personal online relations can be dangerous so people have to exercise caution. We also need to be sure to use only trustworthy websites for fact finding and not to believe everything we read or see on the internet.

Technology and the Senate

As a member of the Senate Subcommittee on Energy, Science and Technology I will take a lot of what young Nebraskans have to say about today’s advancements with me back to Washington.

It will help me with my work on this panel which has jurisdiction over legislation and oversight involving renewable energy production and energy efficiency improvement on farms and ranches and in rural communities; food and agricultural research, education, economics and extension; innovation in the use of agricultural commodities and materials.

Technology is the future and as the students in O’Neill are showing, embrace it, use it and don’t let it pass you by. 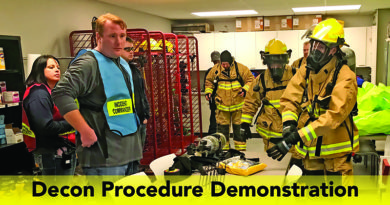