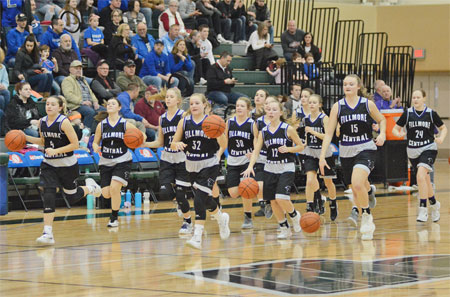 Third-seed Fillmore Central captured the school’s first-ever win in Lincoln and went on to earn fourth at the 2019 NSAA Class C-2 State Girls Basketball Tournament.  The 23-6 Panthers would down Lourdes Central Catholic 53-41 on Thursday and then fall to Crofton and Oakland-Craig.
FC led from start-to-finish against the Lady Knights on Thursday night at Lincoln Southwest.  The Panthers scored the game’s first six points and an Erin Schmidt basket in the paint had FC up 12-4.  A Lourdes CC trey in the first period’s final seconds had the score, 12-9, after one.  The Panthers struggled with their shots down low and failed to extend the lead in the second period.  The Lady Knights cut the lead to one at 19-18, before a Jackie Schelkopf 3-pointer and later a steal, lay-up and converted free throw helped push the advantage to 30-23 at the half.
Lourdes CC would make another run early in the third period to cut the score to 32-29, but the Panthers would again right the ship and lead 42-32 after a Lexi Theis lay-up. A Halle Theis three-point play extended FC’s lead to 47-33 early in the final quarter.  The Panthers would maintain a double-digit lead from there and win their first game at State.
Schmidt led the Panthers with 16 points. H. Theis added 15 points and both Schelkopf and L. Theis had eight.  Macy Scott added six points.  FC converted two 3-pointers and went 15-for-23 (65 percent) at the charity stripe.
The Panthers were unable to keep their momentum going on Friday, as they fell to Crofton 63-44.  The Warriors led the contest 19-15 after one period and 38-28 at intermission at the Devaney Center.  An 18-9 third quarter surge put the game out of reach.
Schelkopf tossed in a dozen to lead the Panthers in scoring.  Schmidt added nine points and Scott put in seven. Both H. Theis and Abby Nichols scored five. Abbi Smith and L. Theis both added three points.  FC nailed six 3-pointers in the contest and went 4-for-8 from the free-throw line.
FC hung with Oakland-Craig all game long in the C-2 third-place contest.  The Lady Knights and All-stater Dacey Nelson would prevail late, 68-60.  Nelson scored 31 for O-C.
The Panthers controlled most of the first quarter before a Lady Knight run pushed the score to 19-16 O-C.  FC trimmed the Lady Knight lead to just one, 33-32, at the break at Lincoln Southeast. Missed free-throw opportunities and more of Nelson had O-C up 51-45 after three.
FC cut the Lady Knight advantage to just three at 53-50 midway through the final period.  That is as close as the Panthers would get.
Schmidt muscled in 17 points in the loss.  Schelkopf added 15 points (three 3-pointers), while Scott was also in double figures with 10 (two 3-pointers). H. Theis scored nine points and Nichols had four.  Rhiannon Shaner added three points and L. Theis had a bucket.  The Panthers were 13-for-25 from the free-throw line and drained seven 3-pointers.
In one end-of-the-year rating comment, it was noted that “FC had a break-out season and the Panthers return just about everyone next year.”
Seniors on this year’s record-setting squad were Abbi Smith and Lauryn Monteforte. FC returns all its starters and first two off-the-bench next season.

Eagles Shut Out Griffins In Battle of Unbeatens