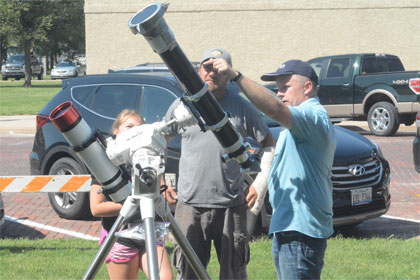 The Big Bang Theory collided with Geneva this past weekend.
Four professional astronomers and seven amateur astronomy enthusiasts affiliated with the Nicolaus Copernicus Astronomical Centre of the Polish Academy of Sciences (NCAC PAS1) arrived at the Geneva Public Library last Thursday and stayed through the August 21 Total Solar Eclipse in the Fillmore County seat.
The group’s mission is to send a live feed of this Monday’s solar eclipse back to their homeland of Poland.  A grant from the country’s Ministry of Science and Education made the week-long journey from Poland to Lincoln to Geneva possible.  The group, which labels the Observatory in Truszcynach as its home base, stayed in Lincoln Thursday through Saturday and spent Sunday night in the library basement.  The Polish contingency was busy over the weekend testing their equipment out front of the library and inviting passersby to look through their telescopes, while sharing information about the August 21 Total Solar Eclipse.  They also tested their livestreaming set up.  On Monday, onlookers could see the live feed on a white screen at the location.
“People confuse astronomy with astrology,” said Robert Szaj, the leader of the group and the CEO of a foundation for education, astronomy, mathematics and physics in Poland.  “We know what we are up too. The visual broadcast of this will be very good.”
The group choose Geneva because the weather history for mid-August is very stable here.  They also needed the internet connections that are offered here.
“This looks like a very good choice for us,” said Martin, one of the better English speaking members of the group.
Martin said there are over 1,000 professional astronomers in Poland and millions of enthusiasts.  He said Facebook and other social media sites are being used to inform people in Poland about the visual broadcast and transport of the event from Nebraska.
The NCAC PAS1 operates two observatories in Poland and is very active in the publication of books. Martin said the group focused on a partial eclipse (72 percent) in his country two years ago on August 25.  About three years ago, an eclipse in Indonesia was the group’s focus.  Martin told those in attendance on Sunday that Monday’s astronomy events will be once-in-a-lifetime in nature and will feature explosions of the sun’s corona that are rarely seen.
“The most important thing tomorrow now is the weather,” said Martin on Sunday.
Monday started out with partly-clouded skies being predicted.
The Fillmore County Village of Fairmont’s population swelled to 5,000-some on Monday.  Fairmont was in the direct route of totality for the August 21 Total Solar Eclipse with over two and one-half minutes of total darkness expected.  Village officials rolled out the welcome mats for the event with special activities taking place on Sunday and most of Monday.
The Fillmore County Historical Society sponsored special activities on Sunday.  Also on Sunday, members of the Skokie Valley Astronomy Club set up telescopes near the Fairmont Watertower and invited people to look through them.  The group meets monthly in Deerfield, Ill. On Monday, Fairview Manor and the Fairmont Community Club sponsored meals at the Fairmont American Legion Club.
The Milligan Community Club sponsored a special activity to celebrate the solar eclipse on Monday.
The tiny Saline County village of Tobias (census 106) also more than tripled in size on Monday, as over 260 students, teachers and community members associated with the Pike Valley School District in Scandia, Kan., ventured to the village to take in the solar eclipse.  Another 40 members of a Lutheran School in Kansas also made the trip.
The Scandia group rented the Tobias Fire Hall for a base location and planned to grill in the park and watch the eclipse activities from the ball field.  The Tobias Community Club is hosting all out-of-town visitors with a hospitality room full of cookies and refreshments.
Any one person’s chances of witnessing a totally eclipsed sun without traveling far from home are quite small because the “Path of Totality” is extremely narrow and has just as much a chance to take place in a remote part of the globe than one with easy access.  For any spot of land on Earth, an often-cited predication states that there is a period of 375 years between total solar eclipses.
The noted astronomer and science communicator Neil deGrasse Tyson stated, “A total eclipse of the sun belongs on everyone’s bucket list.”