The Upper Big Blue NRD Board of Directors met on May 16 and approved changes to District Rule 5 pertaining to groundwater irrigation transfers and artesian wells. After receiving testimony from an April 23 public hearing on two proposed changes to the NRD’s Groundwater Management Rules and Regulations, the Board has now adopted these rule changes.

The second regulation change addresses artesian wells. An artesian well is a well from which groundwater flows under natural pressure. This occurs when a well is constructed in to a groundwater aquifer that is “confined” by a layer of clay material which the water cannot flow through naturally; and the groundwater is under pressure that is great enough to push the water up the well casing to a point above the land surface. This condition occurs in a few areas of the NRD. The major area where it is known to occur during the fall and winter months is in the Beaver Creek Valley and the west fork of the Big Blue River Valley in eastern York and western Seward counties near the Village of Beaver Crossing.

A copy of the new rule changes to Rule 5 is available upon request at the NRD office at 105 N. Lincoln Avenue, York. Activities and projects of the Upper Big Blue NRD are reviewed and approved by a locally elected Board of Directors. The Upper Big Blue NRD is one of 23 Natural Resources Districts across the state. For more information call 402-362-6601.

Shileys Welcome Kaeleigh And Jade To Their Family 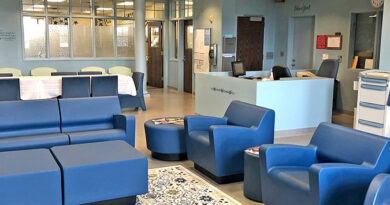 Hearing From You This August