The Exeter-Milligan school board held a lengthy discussion on the plan to coop sports with Friend for this fall at their regularly scheduled monthly board meeting that was held by Zoom on April 8. E-M School board Chairman Adam Erdkamp explained that the Exeter-Milligan area committee met with both the respective Friend and Fillmore Central. Erdkamp read the notes from both meetings and noted they would be posted on the districts website.
At the Friend meeting on March 15, each committee gave an overview of their regular meeting and shared some of the public comments that were received at those meetings. Erdkamp noted that “Overall the comments and questions were similar.”
The Exeter-Milligan contingent shared with Friend that they would be having a similar conversation with Fillmore Central. “We wanted to consider all of the options available for our kids. It’s important to know what Fillmore Central could bring to the table.”
The next step in the process, according to Erdkamp, was to return to the respective boards and report their conversation. At that point if the sports coop was to proceed for this fall a special meeting would have to be held by the end of April so boards could vote and meet the looming conference deadline.
Erdkamp asked the board members who were not a part of the area committee if they had any questions. Tim Pribyl asked the administrators if it was common to move the sixth grade in with the junior high. Kroll responded that it could go either way but, “In general, sixth grade curriculum flows well with seventh and eighth.”
Erdkamp then read the notes of the meeting with Fillmore Central which was held on March 23 in Exeter with just the committee members.
Fillmore Central representatives shared that they would be willing to have a K-4 site in Exeter but could not guarantee it for more than four or five years. There would not be any other school site or sports played at either site of the current Exeter-Milligan district. There would be no change in identity for Fillmore Central. They were also certain that they would not be able to retain all of the current staff. 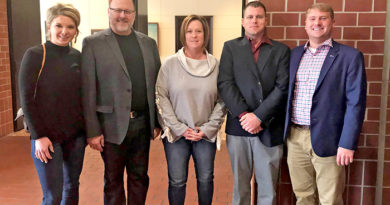