UPDATE: The hearing on Legislative Resolutions dealing with the Geneva YRTC is NOW to take place at Heartland Bank’s conference room (two doors down from the main bank location at the corner of 9th & G Street) on Wednesday, October 2, at 1:30 p.m.

The Nebraska State Legislature’s Health and Human Services Legislative Committee will be conducting a Public Hearing on Wednesday, October 2, beginning at 1:30 p.m., in the Geneva City Council Chambers (south of City Offices) at 167 S. 10th Street.
Legislative Resolution 103, introduced by State Sen. John Lowe, and Legislative Resolution 200, introduced by State Sen. Dan Quick, will be discussed. Both resolutions call for interim studies into staffing concerns and programming at several state-run facilities including the Geneva Youth Rehabilitation and Treatment Center (YRTC). The general public is invited to attend and comment.
“From what I’ve been told, most of the discussion will be about Geneva (YRTC),” State Sen. Tom Brandt said. “It will be an informal hearing…more of a discussion pertaining to what’s planned, going on at the Geneva YRTC.”
Geneva Mayor Eric Kamler has been in constant contact with Nebraska Department of Health and Human Services (DHHS) and Nebraska Department of Administrative Services (DAS) over the current situation and plans at the Geneva YRTC.
“I would personally like to invite as many of you as possible to come,” said Kamler at a recent Geneva City Council meeting. “The Geneva YRTC is an absolute staple of our community and an important employer.”
In mid-August, state officials moved all the female residents in Geneva to the Kearney YRTC. At the time, DHHS officials said they would assess repairs needed at the Geneva YRTC and also re-examine programming at the facility.
A Letter to the Editor from Nebraska DAS director Jason Jackson follows. It was submitted to this newspaper last Wednesday.
The Youth Rehabilitation and Treatment Center-Geneva plays a major role in the Geneva community and surrounding area. Unfortunately, due to the vandalism by the residents at the facility, the Nebraska Department of Health and Human Services (DHHS) had to relocate the young women being treated there to the Youth Rehabilitation and Treatment Center-Kearney. As Director of the Nebraska Department of Administrative Services (DAS), the department responsible for maintaining these facilities, I’d like to give the Geneva community context on what occurred at YRTC-Geneva to cause this current situation, and our team’s ongoing effort to get YRTC-Geneva back up and operational.
The safety and well-being of the youth placed in the State’s care is our primary concern with this issue. That has been our primary concern since the recent surge of vandalism by the residents began in October, 2018, resulting in the relocation of young women from the Laflesche building, one of YRTC-Geneva’s living spaces. That has continued to be our primary concern as 12 fire suppression heads were destroyed in various buildings in independent incidents of vandalism since May of this year. The resulting flooding ultimately made the remaining buildings on the Geneva campus uninhabitable. This is when DHHS CEO Dannette Smith made the decision to relocate the young women to YRTC-Kearney. 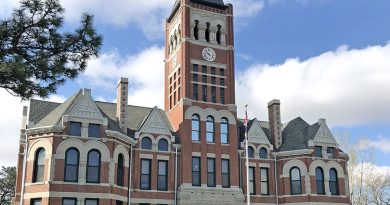