Exeter-Milligan won its only volley match of the week on Tuesday, September 22. The Timberwolves are currently 11-3 on the season. E-M will travel to Kenesaw for a triangular this week against the 11-5 Class D-1 Blue Devils. Class C-1 Gibbon (7-9) will also be in Kenesaw.
E-M rolled past Friend 25-14, 25-15, 25-10 on September 22.
Cammie Harrison pounded 10 kills and Jaiden Papik had eight. Daisy Kanode thumped six kills and Jasmine Turrubiates had five. Both Emma Olsen and Malorie Staskal had one. Olsen posted 19 assists and Natalie Staskal had six. Kiah Songster whacked six ace serves. Briana Capek belted four ace serves. Harrison, Kanode and M. Staskal all tallied two aces.
Papik came up with 13 digs, Jozie Kanode and Olsen both had seven digs. Harrison had eight digs and N. Staskal had six. D. Kanode came up with four and Songster had a pair of digs. 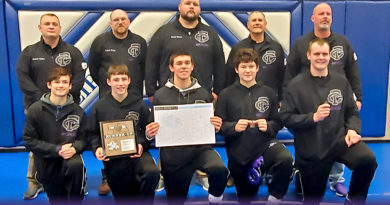