The Fillmore Central/Exeter-Milligan/Friend softball team had a rough week last week, as the Panthers were only able to capture one victory. FCEMF is now 9-10 on the season and traveled to St. Paul on Monday to play in a triangular there. This year’s Southern Nebraska Conference Softball Tournament is this Saturday in David City.
FCEMF opened up play last week with a 15-7 loss at home against Wilber-Clatonia on Monday. The Wolverines are 3-11.
“Wilber played extremely well,” Panther head coach Aaron Lauby said. “I was impressed with not just their hitting but they made some big plays in the outfield that prevented some big innings for us and they were aggressive at the plate and made life difficult for our pitchers. I thought we battled and really put together some quality at bats, but we just weren’t ever really able to seize control of the momentum of the game. Every time we had a chance to have a really big inning, they made a great defensive play, or came up with a big hit to keep us on our heels.”
“Abby Nichols hit her first home run. We had quite a few girls really have good nights offensively. Vanessa Lukes did a great job coming in to pitch late in the game.”
On Tuesday, the Panthers fell 7-6 to Central City on the road. The Bison are 10-9.
FCEMF was up 2-1 for much of the game. The game was tied 3-3 after regulation. Both squads failed to score in the eighth and ninth innings. The Panthers pushed three runs across the plate in the tenth inning, while the Bison plated four for the win.
Megan Rumery went 3-for-5 from the dish and pounded a two-run home run. Kelsi Gaston went 2-for-4 at the plate and also thumped a dinger. Claire Kimbrough scored two runs in the heartbreaking loss.
Lilly Ellison and Amy Lauby both pitched for FCEMF in the contest.
“It was an extra-inning thriller,” Lauby said. “Just a great atmosphere and a really competitive ball game. This type of game could serve us well down the road. We had some girls step up and have some big hits. I thought both of our young pitchers did a nice job in stressful situations. We made some big defensive plays to get out of a few jams. We came out on the losing end tonight but I saw a lot of positive play.”
On Thursday, the Panthers split their games in a home triangular. FCEMF fell to 14-6 Hastings St. Cecilia 8-0 in five innings and downed Polk County 10-9 in nine innings. 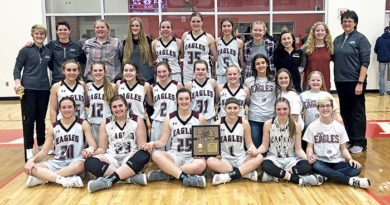