Bruning-Davenport/Shickley remained undefeated by downing Blue Hill convencingly 50-8 on Friday night in Bruning. The contest was B-D’s Homecoming.
The 5-0 Eagles led the 1-4 Bobcats 28-8 at halftime—despite being whistled four times for holding (two bringing touchdowns back); two questionable personal foul calls and having a two-way starter being ejected by an even more controversial targeting penalty.
Battling through all this, No. 1 BDS remains perfect heading into its showdown with No. 5, 5-0 Kenesaw on the road. The Eagles haven’t dropped a regular-season game in the past five years.
“Our kids have dealt with adversity very well this year,” BDS co-head coach Mark Rotter said. “They do not get rattled when things are difficult.”
Aaron Mick rushed for two scores and one PAT. Dalton Kleinschmidt hit paydirt twice on the gound. Signal caller Dominic Philippi rushed for a touchdown. Jaron Norder and Easton Weber both rushed for a TD and Seth Stengel and Tyler Grote both added a PAT.
Philippi also completed five passes to five different receivers for 107 yards.
“He did a great job of keeping the defense guessing who you’ll throw to next,” co-head coach Chris Ardissono said.
BDS racked up 534 total yards of total offense compared to 108 yards for the Bobcats. The Eagles were also whistled for 14 penalties totalling 124 yards. Blue Hill was called for one live-ball penalty and four overall.
Kleinschmidt toted the rock for 153 yards and Mick carried it for 85 yards. Philippi rushed for 60 yards. Grote rushed for 39 yards and Norder had 41. Mick caught a 34-yard pass and Greg Schroeder hauled in a 27-yard pass. Eli Noel snagged a 24-yard pass.
Leading the defense was Kyle Ardissono with 10 stops. Kleinschmidt had seven tackles and both Grote and Philippi had six stops. Weber and Tanner Bolte both made five tackles. 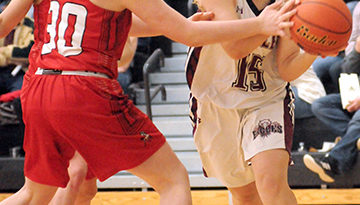