Just into the second quarter, the scoreboard in Shickley read Guest 22, Home 0. A sight you don’t see often (ever?) associated with Bruning-Davenport/Shickley football. The Eagles settled down to business and cut the Tiger margin to 22-8 at halftime and 28-22 after three periods.
BDS would tie the contest at 28-all midway through the final period on an 11-yard Dylan Domeier to Eric Schroeder TD strike. The PAT came up just short.
The Eagles had two chances to win the game in regulation, but a scrappy Palmer team wouldn’t allow that and the game would go into Overtime. The Eagle defense continued its second-half momentum and held the Tigers out of the end zone first in the extra period. BDS would score on second down on its possession to give the Shickley Homecoming crowd something to cheer about.
“We stuck together,” Eagle co-head coach Mark Rotter said. “They knocked us down so many times, but like Rocky Balboa, we just kept getting back up off the deck.”
BDS dominated the game statistically, 396 total yards to 242, but Palmer connected on some long pass plays early on to grab the early lead. The Eagles had success moving the ball but couldn’t mount a consistent first-quarter drive.
BDS hosts Lourdes Central Catholic this Friday night. Kick-off is slated for 7 p.m., in Bruning. 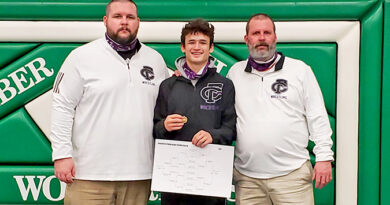