With a room full of young wrestlers and excitement, and continuous momentum gained by top-three finishes at tournaments and invites, it took few by surprise that Fillmore Central would have a strong showing at the C-1 District Wrestling Meet. But a runner-up team finish in the talented field at Malcolm, that was better than expected.
FC scored 130 points on Friday and Saturday—34 less than District champion Archbishop Bergan but 13 more than third-place Tri County and 15 more than fourth-place Bishop Neumann. The District team runner-up finish is the best result in FC history. Also, the five qualifiers for this week’s NSAA State Wrestling Championships is the most in school history.
“The five wrestlers we took to Districts that didn’t qualify (for state) scored 32 team points which was a huge reason why we were able to get second place,” Panther head coach Ryan Komenda said. “Those wrestlers’ efforts were amazing and all of those wrestlers are underclassmen and will be back for next season.”
The FC wrestling program qualified two grapplers for State in 2016. In 2017, three wrestlers qualified for State and in 2018, the Panthers sent two to Omaha. Last year, FC sent four wrestlers on to State.
This year, Panthers Gavin Hinrichs and Aidan Trowbridge will be making their second-straight trip to Omaha. The pair will be joined by freshman Alex Schademann, sophomore Thomas Barnes and junior Connor Asche. 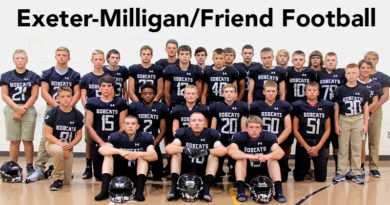