The last day to register for the May 12 Nebraska Primary Election is Friday, May 1, at 6 p.m. Registration information is available online at www.nebraska.gov/apps-sos-voter-registration. You may also contact the Fillmore County Clerk’s Office at 402-759-4931 (www.fillmorecounty.org) for more information. You will need to be a U.S. citizen, Nebraska resident, and be at least 18 years of age, or be 17 and will reach the age of 18 on or before November 3, 2020. When completing a Nebraska Voter Registration Application, the applicant will need to provide: their name; residence address; postal address, if different from their residence; date of birth; party affiliation; a valid Nebraska driver’s license number or the last four digits of their social security number and their signature. Completed applications should be placed in the County Drop Box, which is located at the south end of the Fillmore County Courthouse parking lot in Geneva—directly south of the building.
Fillmore County Clerk Amy Nelson suggests county voters to choose the early-voting (mail-in) voting option. The deadline for applying for this option is also May 1. At the April 14 Fillmore County Board meeting, Nelson reported that almost 1,400 early-voting applications have been requested by Fillmore County voters. A total of 1,658 votes were cast in the county in the 2018 Nebraska Primary Election. A total of 2,575 voters cast ballots in the 2018 Nebraska General Election (64 percent).
“In fact, yesterday (April 13), we had 150 (early-voting) applications returned in one day,” said Nelson, who also serves as the county’s election commissioner. “I, honestly, don’t know how many people will be out at the polls.”
Supervisor Kenny Harre likes the early-voting option.
“I still think it is the best method, period,” he said.
Nelson said the regular poll locations will be open in the county on May 12. She said, surprisingly, she’s been able to find poll workers in all locations except Fairmont by the April 14 meeting. The majority of Fillmore County precincts vote at the Ag/Exhibition Hall on the Fillmore County Fairgrounds in Geneva. Polling locations are also set up in Exeter, Fairmont, Grafton, Milligan and Shickley. 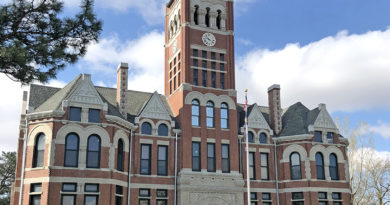 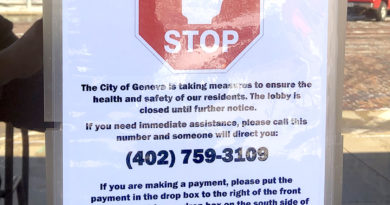